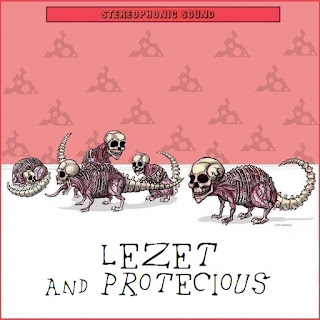 "Ken Protecious and I go way back to the early days of Myspace. We've exchanged so many files and talked to each other so much over the years that I got to consider Ken "a brother from another mother". In fact, I spent more time talking to my friend Ken than to all the members of my close family and kissing-cousins put together. This genuine friendship sparked a number of collaborations and I was more than happy to become a member of the Protecious collective in 2013. In my humble opinion, the music of Protecious is the music that I would love to able to make; a music that is well-crafted, produced and thought out, and which draws upon so many different genres and styles of popular music, deserving of a place in the pantheon of the adventurous. Never once resting on the musical landscape he created for himself, Ken continues to push the boundaries further with each new release and, I swear it, sometimes I just feel I'm listening to an adventurous up-and-coming artist whose major label album has just leaked. Oh, yes, he's that good" / IGOR JOVANOVIC
"My friendship with Igor Jovanovic, aka LEZET, began around 2005-2006, and right away from hearing his music I knew that it was unique, distinctive and original; that was attractive to me because the style was not something I had experimented with or been involved with. At that point, I was involved in mostly catchy pop rock songs, but, being a fan of all styles of music, and being a mixer/producer/arranger, listening to all styles will only make you a better mixer/producer/arranger. So many people are close-minded to different styles of music, which is something I never understood. Music genres are for different moods, and to be trapped within one genre means you're used to being in one particular mood, and some music brings out bad moods, which is a bad thing. I knew Igor would be a valuable addition to my project 'Protecious', and I invited him to join my project and he accepted with open arms. I look forward to the future of Protecious and of any project that Igor is involved with because he is a unique and phenomenal talent who has created 500 times more music than I have and is the most open minded person I have ever known when it comes to music. So Lezet and Protecious or Protecious and Lezet fit like a glove. This Lezet and Protecious album was recorded/mixed/arranged throughout 2014-2015. The album is a collection of material of different styles but would we want it any other way? My particular favorites of this album are Xenu Fiction, Seashells and Lullaby. I hope everyone enjoys listening to as much as we had putting it together. Thanks to Adceph for the wonderful cover art and to Jared C. Balogh for appearing on "Buttermelt". I have so much bitterness towards the music industry because of what is chosen to be popular and the true geniuses remain unheard. Lezet, if anyone, has earned and deserves to be showcased with the best of them. Cheers to the future of more albums and collaborations with LEZET" / KEN PROTECIOUS

Classwar Karaoke is best known for an ongoing series of groundbreaking quarterly surveys of experimental music & film, published via FMA & YouTube. These latest full-length releases form part of a crowdfunding initiative, aimed at financing physical releases. Classwar Karaoke was founded by Anthony Donovan in 2008, with Jaan Patterson joining in 2010.