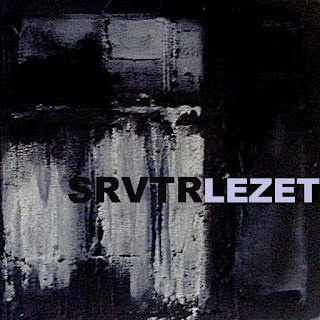 about
"Meet Gildas Brugaro aka SRVTR: Painter, musician, graphic designer born in Saint-Malo, France. He along with Netlabel LEGEND and multi-disciplinary artist LEZET with upwards of 60+ albums out have made this beautiful SPLIT for Yuca Tapes. Each has made 1 track that will test your patience and your ability for DEEP Listening. Enjoy: SPLIT by SRVTR & LEZET! Bon Appétit!!" (Yuca Tapes) 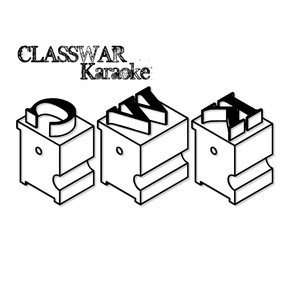 a very special 033 SURVEY by Claswwar Karaoke
This survey is different from the thirty-two which proceed it. For our 33rd survey, we decided to temporarily dispense with the usual open call - which has hitherto been a constant and defining feature of the Classwar Karaoke surveys since they began in May 2008. There was no special significance to 0033 itself; rather, it was felt, by Anthony and Jaan, that the format should be shaken up, with established routines - albeit productive ones - deliberately perturbed, augmented and re-imagined. Surveys 0034 and 0035, and perhaps beyond, will similarly be remodelled. In essence, we want to do what we have always sought to do - that is, create conditions for new creative collaborations and personal associations; thus reinvigorating one of the central and most precious and interesting aspects of the whole enterprise. So many people have met via these quarterly surveys; and we want to keep that potential alive and valid. Classwar Karaoke has always evolved, with attempts made constantly to keep things as dynamic as possible. We, meaning everyone involved, can claim some success in this. Not for nothing have we been patronised and supported both by artists with huge international reputations and by those who have been with us, survey upon survey, for many years - but, crucially, with supposed knowns and supposed unknowns always presented equally, arranged alphabetically, with no headline acts in bold and others in grey. Take us at our word. The name of this project, though playful, should be understood literally. Classwar Karaoke will never deviate from this ethos.
So, as a practical first foray into the desired shake-up, two projects were proposed, and the call for interested parties was made - with the explanation that no open call would follow for this survey. As ever, the response was fantastic and exciting. Project 1 would be comprised of a series of duos, trios and quartets, with personnel divined by chance procedures .... that is, names on bits of paper, screwed up into balls, and plucked out randomly. Once members were established, they were left to compose and interact as they liked in the usual way, simply having the 10 minutes-per-piece limitation and the deadline to contend with.
These were drawn out as follows:
QUARTET 1: Jukka-Pekka Kervinen, Geoff Leigh, Anthony Donovan and Pixyblink;
TRIO 1: Hopek Quirin, Mark Browne and Neal D Retke;
TRIO 2: Stefan Brand Stifter, Jaan Patterson and Paulo Chagas;
DUO 1: Siegfried Kärcher and John Bisset;
QUARTET 2: Arthur Henry Fork, Ton Haring, Craig S. Wilson and Anthony Osborne;
TRIO 3: Neil McIntee, Jay Decosta Peele and Lee Riley;
DUO 2: Peterson Ruiz and ND Dentico;
QUARTET 3: Jeff Potter, Susanne Hafenscher, Vincent Bergeron and Antonio de Braga;
TRIO 4: Chris Bywater, Juan Antonio Nieto and Hubert Heathertoes;
DUO 4: Wilhelm Matthies and Jared C. Balogh;
QUARTET 4: Richard Fontenoy, Carlos Ramirez, Igor Jovanovic and AG Davis;
TRIO 5: Kelly Dain Anderson, Tim Iserman and David Nadeau;
DUO 5: Paul Bunyan and Damien Olsen;
TRIO 6: Chris Silver T, Mike Fibes and Roger Stevens;
DUO 7: Patrizio Pica and Mauro Sambo;
DUO 8: Philip Lucking and Cabrini Green.
A further two duos, nominated as DUO 3 and DUO 6, respectively, did not result in material being submitted. Some groups divised names for themselves and titles for their pieces, others did not. In the latter case, a given duo, say, was credited as DUO 2, with it's piece being called 'Untitled'. In every case, full credit is given on the Classwar Karaoke blog and on the applicable Free Music Archive sidebar, as always.
As Project 2, a series of four so-called Linear Chains were also proposed, with members again divined by chance procedures, and similarly with the 10 minutes-per-piece limitation. The initial ambition was to host two such chains, each with ten members. In the event, interest went beyond that, and thirty-seven people volunteered, enough for four chains, albeit with the fourth being comprised of seven rather than ten participants. As things developed, for differing reasons, two members of different chains dropped out - leaving one chain of ten, two chains of nine and one chain of seven. The idea with this project was that the first person in a chain made material, passed it to the second for their additions and alterations, who then passed it to the next, and so on, until the last person finished the piece and submitted it. Given the limited time-frame, the numbers of steps involved and, in many cases, the unfamiliarity between members, this worked out exceptionally well. Some members set-up special 'secret' Facebook groups or message-threads, aiding admin and organisation, and in which wider discussions took place. In some cases, as with the duos/trios/quartets strand, group names and titles were decided upon; where they were not, the chain itself was merely given its designated number and the piece was, again, titled as 'Untitled'.
The chains were as follows: LINEAR CHAIN ONE: (1) Paulo Chagas (2) Richard Fontenoy (3) John Jasnoch (4) Stefan Brand Stifter (5) Antonio de Braga (6) Øystein Jørgensen (7) Anthony Donovan (8) Sebastien Branche (9) Hopek Quirin;
LINEAR CHAIN TWO: (1) Igor Jovanovic (2) Neal D Retke (3) Cabrini Green (4) Anthony Osborne (5) Susanne Hafenscher (6) Philip Lucking (7) Paul Bunyan (8) Jaan Patterson (9) Arthur Henry Fork (10) Jukka-Pekka Kervinen;
LINEAR CHAIN THREE: (1) Lee Riley (2) Neil McIntee (3) Peterson Ruiz (4) Ton Haring (5) Juan Antonio Nieto (6) Jeff Potter (7) Nick Endee Ocitned (8) Jay Decosta Peele (9) Mark Browne;
LINEAR CHAIN FOUR: (1) Marcin Tomczak (2) AG Davis (3) Chris Bywater (4) Jonny Martin (5) Siegfried Kärcher (6) Hubert Heathertoes (7) Jared C. Balogh
In addition, and intentionally within a few short days of the deadline itself, as a Project 3, a call was made for SOLO pieces.
Thanks to everyone who took part, indulging us in this experiment. Your faith in us is a lovely thing, and it was all lots of fun.
The result of this endeavour speaks for itself. The material is exceptional. Lend 0033 survey your ears.
It's all here:
http://freemusicarchive.org/music/Classwar_Karaoke/Classwar_Karaoke_-_0033_Survey/